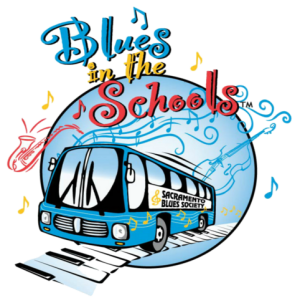 The Blues in the Schools (BITS) Program is multi-faceted according to the particular need. It can be a six week after school program culminating in a Blues Showcase in a local club . It can be a single presentation for students at a civic location like the Crocker Museum. It can be a Songwriting Competition in county-run schools that serve incarcerated youth, teens on probation and/or students expelled from their home districts—clearly youth at risk who need a positive force in their lives.

Working with a consistent volunteer committee since 2004, BLUES IN THE SCHOOLS is the mission based program of the Sacramento Blues Society (SBS). BITS is a major reason that the SBS was tapped for the 2014 “Keeping the Blues Alive” Award by The Blues Foundation, the international organization based in Memphis, Tennessee.

BITS has realized a bigger vision unfolding, an overriding arc of a narrative that is much larger than a student learning American Blues history, learning to play an instrument and performing on stage – there is visible and vitally impactful social and emotional learning at work.

• The creation of self-identity and value; self-worth, confidence
• The building of leadership skills
• Learning to play music together creates problem solving skills and patience
• The act of individual expression WITHIN a group effort; community building

“During my time in Blues in the Schools, many positive things happened to me. I learned some life-long lessons in music, gained live playing experience, but most importantly I became part of a family.”
-Zach W., Woodcreek High School

If you ever wanted to try something you have never thought of that will change your life. Come out to the Out of the Box Festival. Art by day, Party by Night.

Blues in the Schools Supporters & Sponsors

POWERED BY THE BLUES